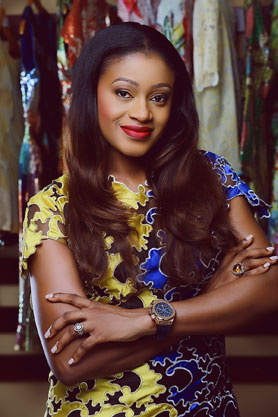 Lanre Da Silva Ajayi (LDA) is the founder of eponymous design label. In nine years her passion for fashion has gotten stronger making the label a fashion favourite among the media, celebrities and fashion lovers.

LDA the brand first arrived in the fashion scene in 2005 with iconic 1940's couture signature designs - a result of what has evolved into a much more modern and cutting-edge brand and a full-blown fashion house. The label's collection includes couture, pręt a porter, and accessories such as hairpieces and statement jewellery.

Regardless of the label's strong historical design roots, LDA's creatively combines pattern, print, exquisite and even traditional fabrics to produce day wear, evening wear, gowns and cocktail dresses that bridge time and make the label successful within and outside Nigeria.

An LDA woman is the personification of sophistication, femininity, brilliance and boldness, which are the inspiration for each of her collections. Lanre states "Couture, colour and boldness with an edgy twist are the signature of my designs".

In January 2012, renowned designer Roberto Cavalli and Franca Sozanni Editor-In-Chief of Vogue Italia and Goodwill Ambassador of Fashion 4 Development made a special trip to Lagos, and during their time in Lagos Sozanni and the Vogue Italia team made a special visit to LDA's flagship boutique to view her collections.

This visit resulted in the designer showcasing a capsule collection during the Mercedes Benz New York Fashion Week Fall 2012/13 at the initiative "Fashion 4 Development" that supports the United Nations Millennium Development Goals and the unprecedented global effort "Every Woman Every Child". The event was organized by Ambassador Cesare Maria Ragaglini - permanent representative of Italy to the United Nations and it was in honour of Ms. Franca Sozzani Editor-in-Chief, Vogue Italia and Fashion 4 Development Goodwill Ambassador. It was also a Fashion Business initiative to attract the attention of potential buyers & investors.

As a result to the visit, on the 4th of May 2012, Vogue Italia and yoox.com's special project (Discovered in Africa by Vogue Italia exclusively on yoox.com) was live on the yoox.com under special projects. People from different parts of the world now have an easier access to buy pieces from LDA through this project.

The brand was featured in L'Uomo Vogue, May-June 2012- "Rebranding Africa" Issue dedicated to Africa to show how this continent is moving and developing while trying to get out of a difficult situation of poverty and illness.
In June 2012 Pitti Immagine W held in Florence Italy included Nigeria as guest nation in collaboration with MTN Lagos Design and Fashion Week coordinated by Style House Files Director Omoyemi Akerele. LDA was part of the designers selected to showcase from Nigeria and present her Autumn/Winter 2012 collections to buyers across Europe.

December 2012, LDA was part of the NDANI-Style House files Collaboration Pop Up store project in Selfridges, UK pieces of the brand were displayed for one month in the iconic departmental store on Oxford street in London.

The brand is also stocked at the flagship boutique, Temple Muse, and at 41 LUXE in Abuja.

For her contributions to the Nigerian and African fashion industry, LDA has received numerous accolades and awards for excellence.

She is married with two children.